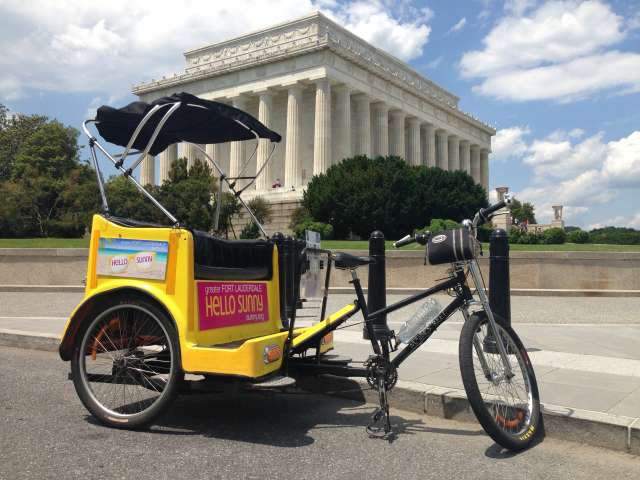 Opening Hours and Tickets at the Lincoln Memorial

Handicapped Services at the Lincoln Memorial

Like all the major DC monuments, the Lincoln Memorial is handicapped accessible.  There is an elevator that leads up to the inner chamber and the top Lincoln statue at the top of the steps.   Handicapped parking at the Lincoln Memorial is available on Daniel French Drive, which comes near the base of the Memorial.  Here, you will also find a National Park Service information kiosk.  Ask at the kiosk for the free use of a wheelchair to tour the Lincoln Memorial, the Vietnam Veterans Memorial and the Korean War Veterans Memorial.  This service is available during working hours and is always free of charge.

The nearest Metro stations are Foggy Bottom Metro, Smithsonian Metro, Federal Triangle Metro (all on the Orange and Blue lines) and the Arlington Cemetery  Metro (on the blue line only — but service at this stop finishes around 10:00 PM).  On Daniel French Drive, there is a Capitol Bikeshare stand.  A great way to get here is to include the Lincoln Memorial in a pedicab tour of Washington DC attractions.  Nonpartisan Pedicab gives a great tour of the DC monuments and the National Mall.

The Lincoln Memorial stands at the west end of the National Mall as a neoclassical monument to the 16th President. The memorial, designed by Henry Bacon, after ancient Greek temples, stands 190 feet long, 119 feet wide, and almost 100 feet high. It is surrounded by a peristyle of 36 fluted Doric columns, one for each of the thirty six states in the Union at the time of Lincoln’s death, and two columns in-antis at the entrance behind the colonnade. The north and south side chambers contain carved inscriptions of Lincoln’s Second Inaugural Address and his Gettysburg Address. Lying between the north and south chambers is the central hall containing the solitary figure of Lincoln sitting in contemplation. The statue was carved in four years by the Piccirilli brothers under the supervision of the sculptor, Daniel Chester French. The statue of Lincoln is 19 feet high and weighs 175 tons. The original plan was for the statue to be only ten feet high, but this was changed so that the figure of Lincoln would not be dwarfed by the size of the chamber. A commission to plan a monument was first proposed in 1867, shortly after Lincoln’s death. The design for that plan called for six equestrian and 31 pedestrian statues of colossal size, with a 12-foot statue of Lincoln in the center. That project was never started for lack of funds. Congress approved the bill to construct this memorial in 1910. Construction began in 1914, and the memorial was opened to the public in 1922. The Memorial is visited by millions of visitors each year and is the site of many large public gatherings and protests. Martin Luther King, Jr. delivered his famous “I Have a Dream” speech to a crowd by the Lincoln Memorial in 1963 .

Posted in Things to Do in DC and tagged DC tours, Lincoln Memorial, Washington DC attractions