A visit to the Lincoln Memorial is an unforgettable experience, and at the top of the list for every visitor to Washington DC.  The Lincoln Memorial commands a sweeping view of the entire National Mall.  From the steps of the Lincoln Memorial, one can see the Reflecting Pool, the Washington Monument and all the way down to the US Capitol.  One of the best things to do in DC is to go on a tour of the monuments, where you can go to each different monument in turn and get out and walk around. 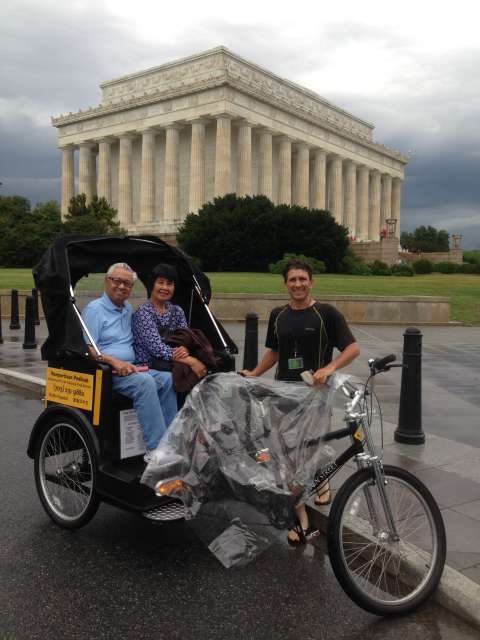 Parking at the Lincoln Memorial

There is an elevator in the interior of the Memorial where you can go up into the inner chamber at the top of the steps. Nonpartisan Pedicab offers specialized Washington DC tours for handicapped and disabled visitors.  In front of the Lincoln Memorial on Daniel French Drive is a National Park Service information kiosk.  During their working hours, they will lend you a free wheelchair to tour the Lincoln Memorial, the Korean War Memorial, and the Vietnam Memorial.  Metered handicapped parking is available on Daniel French Drive.

Attractions Nearby to the Lincoln Memorial

Shortly after the death of Lincoln in 1867, Congress created the Lincoln Monument Association to build a memorial. Initially, a design was considered for a six equestrian and 31 pedestrian statues of colossal size, with a 12-foot statue of Lincoln in the center. The project was never started for lack of funds.  Not until 1910 did two members of Congress, Shelby M. Cullom and Joseph G. Cannon, who had known Lincoln in Illinois, push through a Lincoln Memorial bill which President Taft signed in February 1911. The bill created a Lincoln Memorial Commission to oversee the project and allotted $2 million in funds. The final cost of the memorial, however, was $3 million.

The first stone was put into place on Lincoln’s birthday, February 12, 1914. On May 30, 1922, the monument was dedicated by Former President and Chief Justice William Howard Taft on May 30, 1922, 57 years after the death of Lincoln.  An estimated 50,000 people attended the ceremonies, including hundreds of Civil War veterans and Robert Todd Lincoln, the only surviving son of the president.