Visitors Guide to the FDR Memorial

The Franklin Delano Roosevelt Memorial is dedicated in honor of the 32nd President of the United States, Franklin Delano Roosevelt. FDR was one of the towering figures in American history, guiding our nation through the Great Depression and the turmoil of the Second World War.  He is also the only US President to have been elected to more than two terms in office. The memorial chronicles FDR’s twelve years as president, from 1933 to 1945, through a series of sections designed to feel like rooms.  The entire area spreads out over 7.5 acres. The memorial is composed of four open air rooms — one for each of the four terms that FDR was elected to be president.  Each room depicts one of FDR’s presidential terms and the historical events that took place during each of his terms of office.  In each room there are quotes, sculptures, and statues relating to that term of his presidency.  There is also a running water element that flows throughout the memorial representing the torrent of events that took place during FDR’s presidency.  The memorial is built from South Dakota granite punctuated by waterfalls, alcoves and flowering cherry trees. The FDR Memorial was designed by famous landscape architect Laurence Halperin and completed in 1997.

Opening Hours at the FDR Memorial

The Franklin Delano Roosevelt Memorial is open 24 hours a day, 7 days a week, 365 days a year. National Park Service Rangers are on duty from 9:30 AM until 11:30 PM daily (except for Christmas Day) to answer questions. Rangers also provide interpretive programs every hour on the hour from 10:00 AM to 11:00 PM.  Entrance is always free to the public.

Getting To the FDR Memorial

Handicap Accessibility at the FDR Memorial

The Franklin Delano Roosevelt Memorial is fully handicap accessible. There are a few handicap parking spaces on West Basin Drive.  Wheelchairs can be borrowed from the visitors center/bookstore near the entrance. There are also Braille captions throughout the memorial.  If you are touring the monuments, the best way for visitors who are handicapped or disabled is to take a tour of the monuments with Nonpartisan Pedicab.

CLICK HERE TO SEE THE TOP THINGS TO DO IN DC

In addition to the FDR Memorial, here are some things to do while visiting DC.

The restrooms are behind the visitors center/bookshop.

Tours of the FDR Memorial

Food Availability at the FDR Memorial

No food is available here.  The nearest food kiosk is either at the Korean War Memorial or at the Jefferseon Memorial.

History and Facts about the FDR Memorial

In August 1955, ten years after FDR’s death, Congress established a commission to create a memorial to Roosevelt, the 32nd U.S. president. Four years later, a location for the memorial was found. The memorial was to be located half way between the Lincoln and Jefferson Memorials, along the Tidal Basin.

Although several design competitions were held over the years, it wasn’t until 1978 that a design was chosen. The commission chose Lawrence Halprin’s memorial design, a 7.5 acre memorial that represented both President Roosevelt and his era. With only a few changes, Halprin’s design was built.

Unlike the Lincoln and Jefferson Memorials which are compact, covered and focused on a single statue of each president, the FDR memorial is vast, uncovered, and focused on numerous statues, quotes, and waterfalls.

Halprin’s design honors FDR by telling the story of the president and the country in a chronological order. Since Roosevelt was elected to four terms of office, Halprin created four “rooms” to represent the twelve years of Roosevelt’s presidency.

The rooms, however, are not easily defined and the memorial is more accurately described as a long, meandering path, bordered by walls made of red South Dakota granite.

Since FDR brought the United States through the Great Depression and World War II, the Franklin D. Roosevelt Memorial, dedicated on May 2, 1997, now stands as a reminder of some of America’s tougher times. 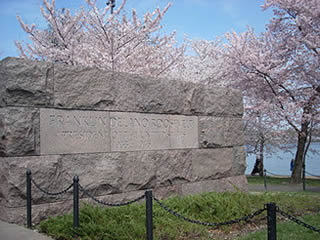 Posted in Things to Do in DC and tagged fdr memorial, Visitors Guide