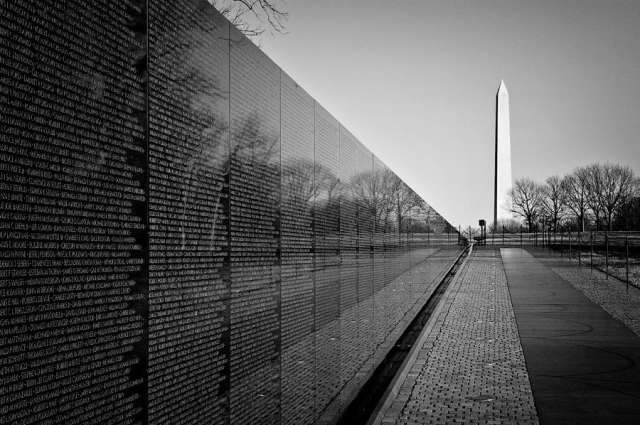 Getting to the Vietnam War Memorial

The nearest restooms are at the Lincoln Memorial to the left of the staircase.  There is a reliable water fountain there as well.  There are several water fountains near to the Vietnam Memorial, although not all of them work at all times.  There is a food kiosk with expensive pricing across the Henry Bacon Drive.  You can get snacks and a few sandwiches.  They also sell souvenirs.  Across Constitution Avenue on 21st Street there is a hot dog cart, although the prices are not much better.  There are no nearby restaurants.

Parking at the Vietnam War Memorial

Parking is difficult here.  During non-rush hours and on weekends, you may be lucky to find  metered on street parking on Constitution Avenue.  However, at morning rush hour and from 4:00-6:30PM, the US Park Police aggressively tickets cars parked here.  There is also metered on street parking on Ohio Drive near to the Potomac River which is not subject to the rush hour restrictions.  However, this entails a fairly long walk.  Your best bet might be to park in a downtown parking garage and take a pedicab tour of the monuments with Nonpartisan Pedicab.  We can pick you up at any downtown location for free.  You can see all the monuments in about two hours and get dropped off back at your car or anywhere else you like.  This tour is really one of the best things to do in DC.

History and Facts about the Vietnam War Memorial

First unveiled on November 13, 1982, the Vietnam Veterans Memorial remains an atypical war monument. Its main feature, a V-shaped wall inscribed with the names of over 58,000 U.S. soldiers killed during the Vietnam War, lacks heroic or patriotic symbols, and its polished black granite façade contrasts with the white marble statues and structures surrounding it on the National Mall. Nonetheless, it has become one of the most popular tourist attractions in Washington, D.C.

Jan C. Scruggs, a wounded Vietnam War vet, studied what is now called post-traumatic stress disorder upon his return to the United States. Within a few years, he began calling for a memorial to help with the healing process for the roughly 3 million Americans who served in the conflict. After watching the movie “The Deer Hunter,” Scruggs apparently stepped up his activism even further, using $2,800 of his own money to form the Vietnam Veterans Memorial Fund in 1979. Many politicians expressed their support, and the U.S. Congress passed legislation reserving three acres in the northwest corner of the National Mall for a future monument. All donations, however, came from the private sector. Bob Hope and other celebrities lended a hand with fundraising, and by 1981 some 275,000 Americans, along with corporations, foundations, veterans groups, civic organizations and labor unions, had given $8.4 million to the project.

Having raised the necessary cash, the Vietnam Veterans Memorial Fund next held a design contest. The guidelines stipulated that the memorial should contain the names of every American who died in Vietnam or remained missing in action, make no political statement about the war, be in harmony with its surroundings and be contemplative in character. Over 1,400 submissions came in, to be judged anonymously by a panel of eight artists and designers. In the end, the panel passed over every professional architect in favor of 21-year-old Yale University student Maya Lin, who had created her design for a class. “From the very beginning I often wondered, if it had not been an anonymous entry 1026 but rather an entry by Maya Lin, would I have been selected?” she would later write.

Many people commended Lin’s winning design, with a former ambassador to South Vietnam calling it a “distinguished and fitting mark of respect” and the New York Times saying it conveyed “the only point about the war on which people may agree: that those who died should be remembered.” But others lambasted it as an insult. Author Tom Wolfe called it “a tribute to [anti-war activist] Jane Fonda,” Vietnam veteran Jim Webb, a future U.S. Senator, referred to it as “a nihilistic slab of stone,” and political commentator Pat Buchanan accused one of the design judges of being a communist. Some critics even resorted to racially insulting Lin, the daughter of Chinese immigrants. Eventually, a compromise was reached—against Lin’s wishes—under which a U.S. flag and a statue of three servicemen were dedicated near the wall in 1984. Nine years later, yet another sculpture was added of three women caring for an injured soldier. Not only did the controversy quickly quiet down, but the Vietnam Veterans Memorial has since become both widely praised and wildly popular. “It is still far and away the greatest memorial of modern times—the most beautiful, the most heart-wrenching, the most subtle, and the most powerful,” a Vanity Fair commentator wrote earlier this year.

When the Vietnam Veterans Memorial was first dedicated three decades ago, Lin’s wall contained the names of 57,939 American servicemen believed to have lost their lives in the Vietnam War. But since then, that number has jumped to 58,282. In fact, 10 new names were engraved this year, including that of a marine corporal whose 2006 death from a stroke was determined to be the result of wounds received in action in 1967. Meanwhile, a few survivors have had their names erroneously chiseled into the wall. In order to be added, a deceased soldier must meet specific U.S. Department of Defense criteria, and those postwar casualties not eligible for inscription on the wall are honored instead with an onsite plaque.

Tens of thousands of so-called artifacts have been intentionally left at the memorial since its opening, including letters, POW/MIA commemorative bracelets, military medals, dog tags, religious items and photographs. One person even left behind a motorcycle. Rangers from the National Park Service collect these items every day and, with the exception of unaltered U.S. flags and perishables, send them to a storage facility in Maryland. Though that facility is not open to the public, certain memorial artifacts are put on view as part of traveling exhibits. Such artifacts will also be displayed at an education center scheduled for completion in 2014.

More information can be had via the National Park Service website.