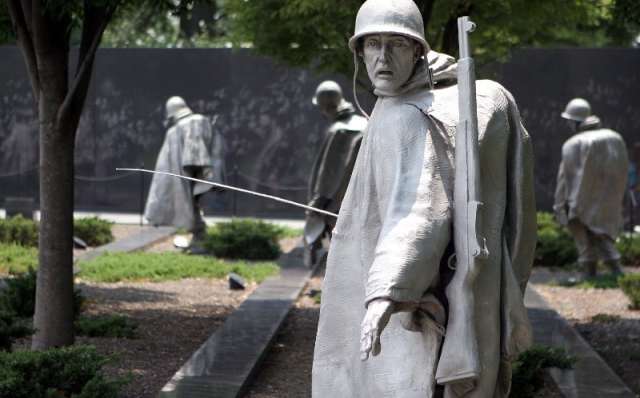 The Korean War Memorial is open 24 hours a day every day of the year.  Entrance to the public is always free.

One of the top things to do in DC is to visit the Korean War Memorial on a monument tour!

Getting to the Korean War Memorial

The nearest Metro stations all approximately one mile away.  These are the Smithsonian station, the Federal Triangle station, and the Foggy Bottom metro station.  Each of these are on the orange/blue/silver lines.  The Arlington Cemetery station is about the same distance, but only the blue line metro stops here.  This station closes after 10:00 PM.  A Capitol Bikeshare stand is nearby on Daniel French Drive.  One way to visit the Korean War Memorial is to include it as part of a monument tour by Nonpartisan Pedicab which allows you to visit all the monuments in about two hours.  Many people say that this one of the best things to do in DC.

Food and Restroom Availability at the Korean War Memorial

There is a food kiosk across the street where you can get National Park food at somewhat inflated prices.  The nearest restaurants are downtown, about a mile away.

CLICK HERE TO SEE THE TOP THINGS TO DO IN DC

Take a look at these things to do while visiting DC.  Here’s how to take advantage of visiting all the monuments and memorials and museums that DC has to offer.

Parking at the Korean War Memorial

There is metered on-street parking on Ohio Drive.  However, spots are limited.  First-come, first-serve.  Some metered on-street parking is available on Constitution Avenue, but be careful not to have your car parked here during rush hours.  Between 4:00-6:30 M-F, the police aggressively ticket cars that remain parked on Constitution Avenue.   Private vehicles without handicapped stickers or plates are not even permitted to enter onto Daniel French Drive.  The smart thing to do is not to try to tour the Mall with your car.   One of the best things to do in DC is to take a pedicab tour of the monuments with Nonpartisan Pedicab.    We can pick you up at any downtown location for free.  You can see all the monuments in about two hours and get dropped off back at your car or anywhere else you like.

The Korean War Memorial during the Cherry Blossom Festival

This Memorial is not surrounded by cherry trees.  However, the nearby MLK Memorial is one of the best places in DC to see the blossoms.

Nearby Attractions to the Korean War Memorial

The Lincoln Memorial is very nearby.  The Vietnam War Memorial is not far away.  The MLK Memorial is also a short walk down Independence Avenue.

History and Facts about the Korean War Memorial

The Korean War Veterans Memorial is located near the Lincoln Memorial on the National Mall in Washington, DC. It was dedicated on July 27, 1995. The memorial commemorates the sacrifices of the 5.8 million Americans who served in the U.S. armed services during the three-year period of the Korean War. The war was one of the most hard fought in our history. During its relatively short duration from June 25, 1950 to July 27, 1953, 54,246 Americans died in support of their country. Of these, 8,200 are listed as missing in action or lost or buried at sea. In addition 103,284 were wounded during the conflict.

The Mural Wall was designed by Louis Nelson of New York, NY and fabricated by Cold Spring Granite Company, Cold Spring, MN. The muralist, sculptor and architect worked closely to create a two-dimensional work of art adjacent to the three-dimensional statues. The wall consists of 41 panels extending 164 feet. Over 2,400 photographs of the Korean War were obtained from the National Archives. They were enhanced by computer to give a uniform lighting effect and the desired size. The mural, representing those forces supporting the foot soldier, depicts Army, Navy, Marine Corps, Air Force and Coast Guard personnel and their equipment. The etchings are arranged to give a wavy appearance in harmony with the layout of the statues. The reflective quality of the Academy Black Granite creates the image of a total of 38 statues, symbolic of the 38th Parallel and the 38 months of the war. When viewed from afar, it also creates the appearance of the mountain ranges of Korea.

More information can be found at the Korean War Veterans Memorial homepage.