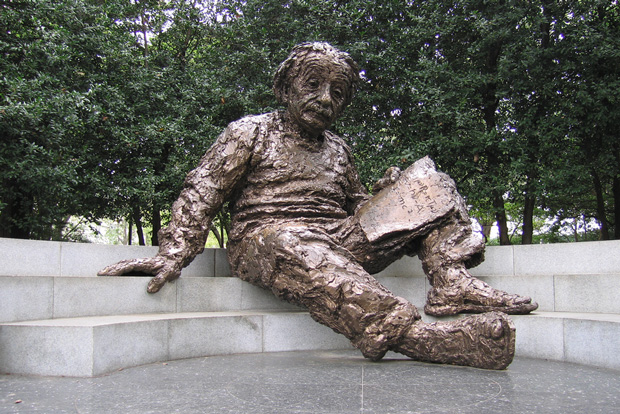 The Einstein Memorial is always free to the public at any time of year.  The Memorial is open 24 hours a day every day of the year.

Getting to the Einstein Memorial

The nearest Metro stations are the Foggy Bottom metro and the Federal Triangle metro.  Each of these is on the blue/orange/silver lines.  Each is approximately one mile away from the Memorial.  There is a Capitol bikeshare station about a block east on Constitution Avenue.   Many people say that the best thing to do in DC is to visit all the memorials by taking a monument tour with Nonpartisan Pedicab.

Handicapped Facilities at the Einstein Memorial

Access is complicated for some due to the presence of a short staircase.  The National Park Service kiosk on the south side of the Lincoln Memorial lends wheelchairs for visitors who wish to go to the nearby attractions. However, this is some distance away from the Einstein Memorial.  Handicapped parking is available near to this kiosk.

Food and Restroom Availability at the Einstein Memorial

Parking at the Einstein Memorial

Parking is always difficult on and near the National Mall.  There is metered on-street non rush hour parking on Constitution Avenue, but this is limited.  For no reason should you remain parked on Constitution Avenue between 4:00 – 6:30 PM on weekdays.  If you do, you will almost surely receive an expensive ticket.   Further away, there is metered on street parking along Ohio Drive near the Potomac River.  Once again, this is limited.  No rush hour rules apply here.  Your best bet might be to park in a downtown parking garage and take a pedicab tour of the monuments with Nonpartisan Pedicab.  We can pick you up at any downtown location for free.  You can see all the monuments in about two hours and get dropped off back at your car or anywhere else you like.  This tour is really one of the best things to do in DC.

The Einstein Memorial is across Constitution Avenue from the Vietnam Veterans War Memorial.  The Lincoln Memorial is a short walk away.  The National Academy of Sciences also has some exhibit space open on weekdays.  Always free.

History and Facts about the Einstein Memorial

The memorial to Albert Einstein, situated in an elm and holly grove in the southwest corner of the Academy grounds, was unveiled at the Academy’s annual meeting, April 22, 1979, in honor of the centennial of the great scientist’s birth. Einstein is depicted seated on a three-step bench of Mount Airy (North Carolina) white granite. The bronze figure, weighing approximately 4 tons, is 12 feet in height. Three caissons, totaling 135 tons, sunk in bedrock to a depth of 23 to 25 feet, support the monument.

In its left hand, the figure holds a paper with mathematical equations summarizing three of Einstein’s most important scientific contributions: the photoelectric effect, the theory of general relativity, and the equivalence of energy and matter. Three quotations from Einstein are engraved on the bench where the figure is seated:

As long as I have any choice in the matter, I shall live only in a country where civil liberty, tolerance, and equality of all citizens before the law prevail.

Joy and amazement of the beauty and grandeur of this world of which man can just form a faint notion.

The right to search for truth implies also a duty; one must not conceal any part of what one has recognized to be true.

The star map at the statue’s base—a 28-foot field of emerald pearl granite from Larvik, Norway—is embedded with more than 2,700 metal studs representing the planets, sun, moon, stars, and other celestial objects accurately positioned by astronomers from the U.S. Naval Observatory as they were on the dedication date.

The sculptor, Robert Berks, known for his portrait busts (John F. Kennedy at Washington’s Kennedy Center), based the work on a bust of Einstein he sculpted from life in 1953. Landscape architect James A. Van Sweden designed the monument landscaping. Einstein was elected a foreign associate of the Academy in 1922 and became a member in 1942, two years after he became a naturalized citizen.

Posted in Things to Do in DC and tagged Albert Einstein Memorial, Nonpartisan Pedicab Tours, pedicab tours of washington, things to do in dc