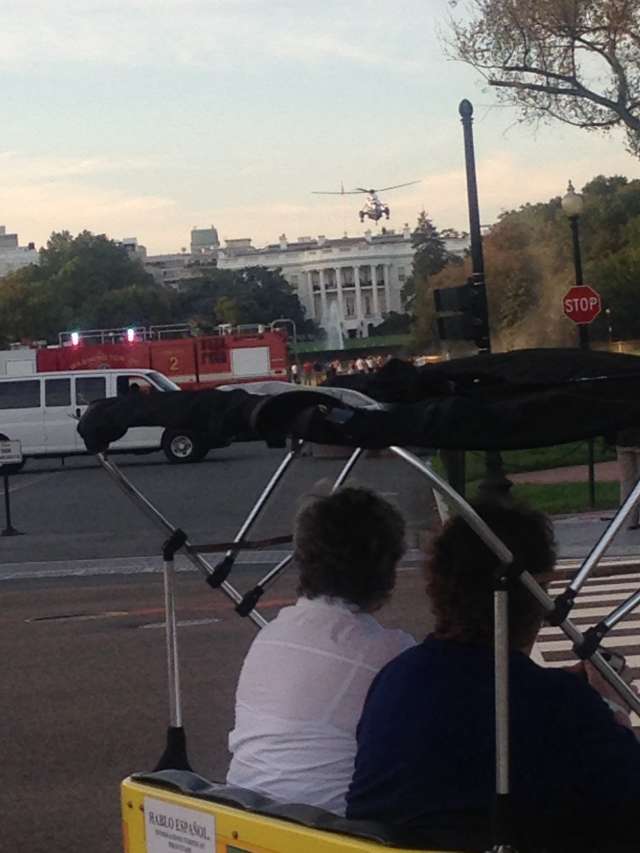 Everyone agrees that one of their favorite things to do in DC is to get a good view of the White House.  There are many ways to get here, but a tour of the monuments by Nonpartisan Pedicab is probably the best.

To get an actual tour to the White House, you need to contact the office of your Congressperson or Senator.  On their websites, they offer help in getting access.  You will have to submit your name for a background check and get approved for a date and time of visit.  This process can sometimes take months.  Plan ahead.  Foreign visitors will have to contact their embassy.  The tour of the White House is free.  Tours take place in the morning.

Getting to the White House

There are several nearby Metro stations.  Federal Triangle and McPherson Square on the Orange/Blue/Silver lines are the closest.  Metro Center on the Orange/Blue/Silver/Red lines is also not too far.  Alternatively, there are several Capitol Bikeshare stations in the vicinity.  One of the best things to do in DC is to take a tour of the city by pedicab.  You can see all the monuments including the White House this way.

Handicapped Facilities at the White House

If you have a pre-arranged tour of the White House, you will have no trouble taking your wheelchair in.  However, from where a vehicle can drop you off, you still have a fairly long walk to get to the entrance of the White House.

Food and Restroom Availability at the White House

The White House is right downtown.  There are several good restaurants nearby.  Alternatively, the National Park Service has authorized a food kiosk right on the Ellipse.

Parking at the White House

Metered on street parking is available (on a limited basis) on Constitution Avenue.  Don’t park here between 4:00-6:30 PM on weekdays unless you really desire an expensive ticket.  There is not a great deal of on-street parking on the streets surrounding the White House.  Many downtown streets have paid parking garages, though.

Nearby Attractions to the White House

History and Facts about the White House

In the late 1700s, it was decided that our country needed a capital city. Our first president, George Washington, picked a site on the Potomac River, midway between the northern and southern states. This spot would come to be called Washington, District of Columbia.

Pierre L’Enfant, a city planner from France, designed the new city. He decided to place the Capitol Building on one hill and the “President’s House” on another hill. L’Enfant had many plans for building the city, but he lost his job after too many disagreements with landowners. The streets and parks that exist in Washington, D.C., today are the result of the work of two surveyors, Andrew Ellicott and Benjamin Banneker, who made maps and plans based on L’Enfant’s original designs.

The original District of Columbia was like a wilderness, and the Potomac River caused the area to be marshy. Pigs roamed the streets, and mosquitoes made people sick from malaria. Conditions improved, however, when the marshes, creeks, and canals were drained.

While the city of Washington, D.C. was being developed, the president’s house was also getting under way. A contest was held to select a designer for the house. While it is said that our third president, Thomas Jefferson, submitted designs for the house, architect James Hoban won the contest.

Work on the house began in 1792. Stonemasons were hired from Scotland. Bricks were made on the north lawn. Sandstone was brought from Stafford County, Virginia, and lumber from North Carolina and Virginia.

President George Washington oversaw construction of the White House, but he never lived there! It was our second president, John Adams, elected in 1796, who first lived in the White House. His term was almost over by the time he moved in, and only six rooms had been finished.

While James Madison was president, from 1809 to 1817, the United States went to war with England. On August 24, 1814, British soldiers sailed up the Potomac River and set fire to the White House. A summer thunderstorm put out the fire, but only the charred outside walls and the interior brick walls remained. It took three years to rebuild the White House.