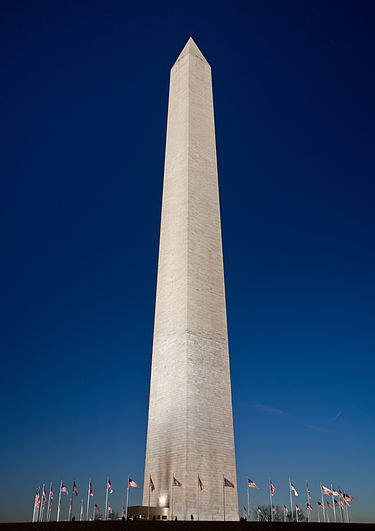 Standing due east of the Reflecting Pool and the Lincoln Memorial, the Washington Monument was built to honor George Washington, the country’s first president. At one time the world’s tallest structure, it remains both the world’s tallest stone structure and the world’s tallest obelisk, standing 555 feet (169.294 m) tall. It is constructed of marble, granite, and bluestone gneiss. Construction of the monument began in 1848, was halted from 1854 to 1877, and was finally completed in 1884.

The Washington Monument has an observation deck that is currently closed for renovations.  It is expected to reopen in the spring of 2019.  When open, the National Park Service gives out advance tickets online for a nominal fee.  Or, alternatively, visitors line up in the early morning to get free same day tickets — first come first serve.

Regardless of whether you visit the observation deck, the Washington Monument is spectacular.  In the evening, it is spectacularly illuminated.  Up and down the National Mall, the Washington Monument is strikes a beautiful view from the steps of the US Capitol to the steps of the Lincoln Memorial.  From the plaza surrounding the monument, you can also see the White House, the Jefferson Memorial, and the WWII Memorial.

George Washington is known as the father of our country.  He was the commanding general who beat the British in the Revolutionary War.  He presided over the Constitutional Convention in 1787.  And, he later went on to serve as the nation’s first president. His greatest contribution to America is that at the peak of his career, he gave up power.  We take this for granted, but the historian will find no prior examples in history of a military leader simply giving up power. The Revolutionary War ended officially in 1783, and George Washington was the general of the Continental Army.  Many people wanted him to become King George I of America.  Instead, he turned his commission back over to the Continental Congress and returned back to his farm at Mount Vernon.

More information can be found at the National Park Service Website.

Posted in Monuments, Memorials and Museums and tagged washington monument