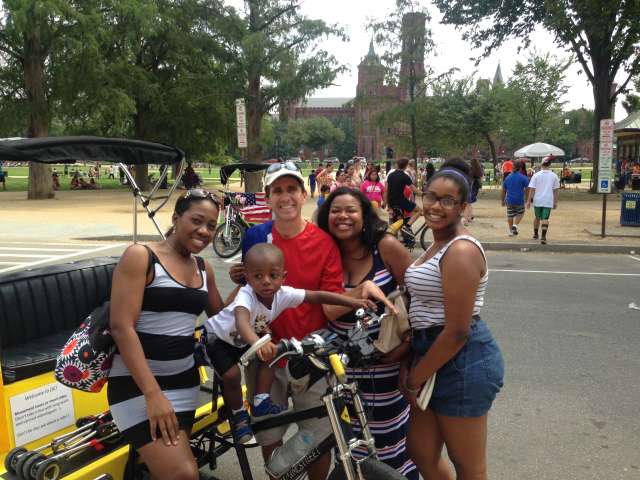 The building is open from 10:00 AM until 5:30 PM every day of the year except Christmas Day. There are wheelchair accessible ramps that make it easy to avoid the steps leading into the building. Construction started on the Smithsonian Castle in 1846, and it was opened to the public in 1855.

The Smithsonian Castle is part of our Featured Tours at Nonpartisan Pedicab.

The Smithsonian Castle has the information center for the Smithsonian Institution. More information about this building can be found at http://www.si.edu/Museums/smithsonian-institution-building.  The Smithsonian Institution currently has 19 museums and other properties. A 20th museum, the African American History and Culture Museum, is currently under construction nearby on the National Mall. Of these properties, 16 are in the city of Washington. One is in Virginia near to Dulles Airport. And two are in New York City. Of the 16 properties in Washington DC, ten are on the National Mall. Several others are not far away in downtown Washington. And a couple of them are within the city limits but further afield.