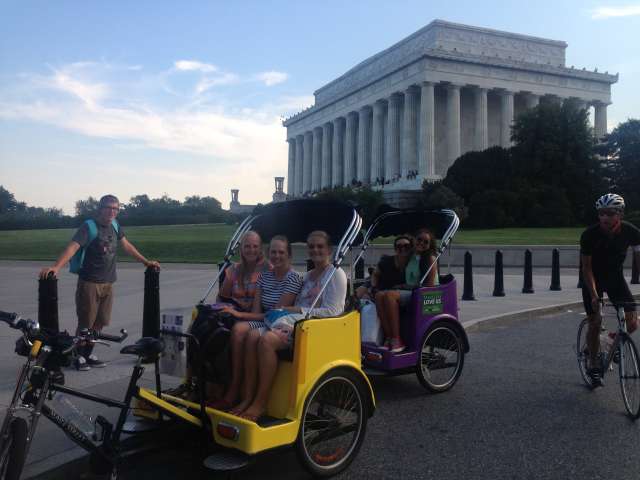 Lincoln Memorial:  Things to do in Washington DC

We always stop at the Lincoln Memorial as part of our Featured Tours.  You can get off the pedicab and explore the memorial.

The Lincoln Memorial was constructed between 1914 and 1922.  The architect was Henry Bacon, and the sculptor of the main statue was Daniel French.  The site where the memorial was eventually built was once in the middle of the Potomac River.  The area was reclaimed as landfill from the river, but at the start of construction was still a wilderness of reeds and swamp.

More information can be had about the Lincoln Memorial from the official National Park Service website:  www.nps.gov/linc/

In the interior of the Lincoln Memorial, there is a huge seated statue of Abraham Lincoln.  On the walls are engraved the words of some of his most memorable speeches and quotes including his “Gettysburg Address.”

The steps of the Lincoln Memorial has been the site of many large public rallies and protests over the year.  Martin Luther King, Jr. gave his famous “I Have a Dream” speech from the top of the steps.  Today, you can see an imprint of his footsteps at the Memorial.

Walk all the way around the base of the Memorial to get a view of Washington DC from all directions.  There is a particularly lovely view of the sunset from the rear of the Memorial.

Posted in Monuments, Memorials and Museums and tagged Lincoln Memorial, things to do in Washington DC