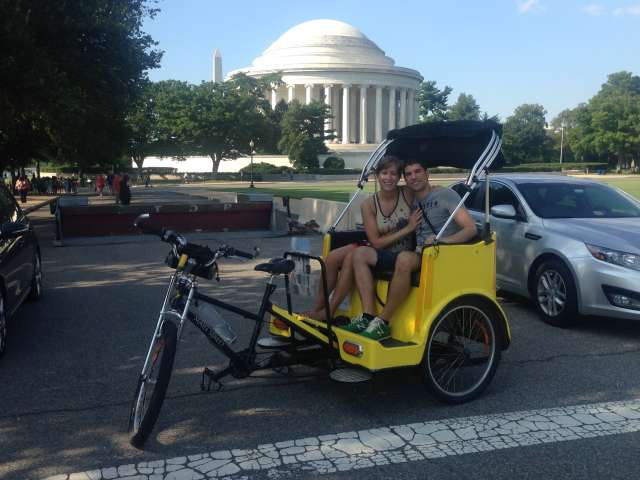 A Jefferson Memorial Tour is always included when one takes a monument tour of Washington DC with Nonpartisan Pedicab.

A Jefferson Memorial Tour is particularly beautiful during the Cherry Blossom Festival. There are thousands of cherry trees planted around the Tidal Basin on the National Mall. During late March or early April, these cherry blossoms all come into full bloom at once. The result is a beautiful view of pink and white flowers around the Jefferson Memorial, the FDR Memorial and the MLK Memorial.

The Jefferson Memorial is a must see destination in Washington DC. It is always free to the public. It is own every day of the year, 24 hours a day. There is always access to handicapped visitors through an elevator that leads to the inner chamber of the memorial. There is handicapped parking nearby. A free wheelchair is available from the National Park Service information booth in the interior of the monument during working hours.

The Jefferson Memorial is on the National Mall to the south of the Tidal Basin. The nearest Metro station is Smithsonian Metro. However, this is still about one mile away. Taxis occasionally come by. There is a Capitol Bikeshare stand outside of the memorial. Perhaps the best option is to take a Jefferson Memorial tour by pedicab.

The Thomas Jefferson Memorial, modeled after the Pantheon of Rome, is America’s foremost memorial to our third president. As an original adaptation of Neoclassical architecture, it is a key landmark in the monumental core of Washington, DC The circular, colonnaded structure in the classic style was introduced to this country by Thomas Jefferson. Architect John Russell Pope used Jefferson’s own architectural tastes in the design of the Memorial. His intention was to synthesize Jefferson’s contribution as a statesman, architect, President, drafter of the Declaration of Independence, adviser of the Constitution and founder of the University of Virginia. Architects Daniel P. Higgins and Otto R. Eggers took over construction upon the untimely death of Pope in August 1937. The Thomas Jefferson Memorial Commission was created to direct the erection of a memorial to Thomas Jefferson by an Act of Congress approved in June 1934. The present-day location at the Tidal Basin was selected in 1937. The site caused considerable public criticism because it resulted in the removal of Japanese flowering cherry trees from the Tidal Basin. Further controversy surrounded the selection of the design of the Memorial. The Commission of Fine Arts objected to the pantheon design because it would compete with the Lincoln Memorial. The Thomas Jefferson Commission took the design controversy to President Franklin D. Roosevelt who preferred the pantheon design and gave his permission to proceed. On November 15, 1939, a ceremony was held in which President Roosevelt laid the cornerstone of the Memorial.

In 1941, Rudolph Evans was commissioned to sculpt the statue of Thomas Jefferson. The statue of Jefferson looks out from the interior of the Memorial toward the White House. It was intended to represent the Age of Enlightenment and Jefferson as a philosopher and statesman. The bronze statue is 19 feet tall and weighs five tons. Adolph A. Weinman’s sculpture of the five members of the Declaration of Independence drafting committee submitting their report to Congress is featured on the triangular pediment. Also noteworthy, and adorning the interior of the Memorial, are five quotations taken from Jefferson’s writings that illustrate the principles to which he dedicated his life.

Few major changes have been made to the Memorial since its dedication in 1943. The most important change to note is the replacement of the plaster model statue of Thomas Jefferson by the bronze statue after the World War II restrictions on the use of metals were lifted. Each year the Jefferson Memorial plays host to various ceremonies, including annual Memorial exercises, Easter Sunrise Services and the ever-popular Cherry Blossom Festival. The Jefferson Memorial is administered and maintained by the National Park Service.

More information can be had through the National Park Service website.