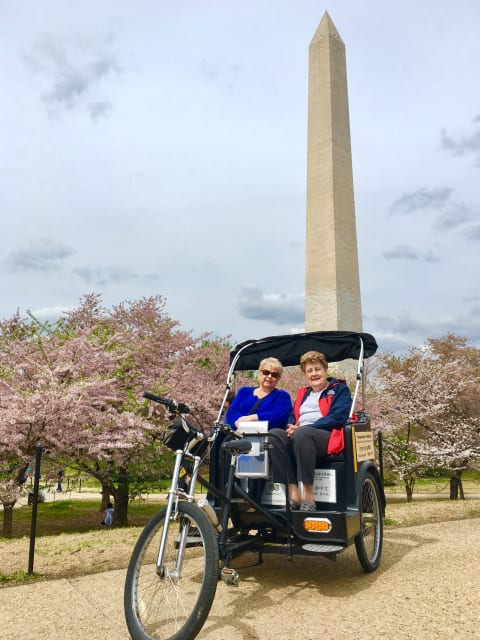 Where to see the Cherry Blossoms?

When do the Cherry Blossoms bloom?

The trees blossom in late March or early April depending on various factors such as the temperatures and precipitation of the winter.  The trees are in pre-bloom for a couple of days.  Then, they go into full bloom for just a few days.  There are a few stands of a more hardy variety of blossom that last for as long as two weeks.  Hopefully, your trip will occur during the full bloom.

History of the Cherry Blossoms

The cherry blossoms will be celebrating 103 years in 2015.  The original cherry trees were a gift from Japan.  The first lady of the United States, First Lady Helen Herron Taft and Viscountess Chinda, wife of the Japanese ambassador, planted the first two of these trees on the north bank of the Tidal Basin in West Potomac Park.  At the end of the ceremony, the First Lady presented Viscountess Chinda with a bouquet of American Beauty Roses. These two trees still stand at the terminus of 17th Street Southwest, marked by a large plaque. By 1915, the United States government had responded with a gift of flowering dogwood trees to the people of Japan.

The first “Cherry Blossom Festival” was held in 1935 under joint sponsorship by numerous civic groups, becoming an annual event. The cherry trees had by this point become an established part of the nation’s capital. In 1938, plans to cut down trees to clear ground for the Jefferson Memorial prompted a group of women to chain themselves together at the site in protest. A compromise was reached where more trees would be planted along the south side of the Basin to frame the Memorial. A Cherry Blossom Pageant was begun in 1940.

On December 11, 1941, four trees were cut down. It is suspected that this was retaliation for the attack on Pearl Harbor by the Empire of Japan four days earlier, though this was never confirmed. In hopes of dissuading people from further attacks upon the trees during the war, they were referred to as “Oriental” flowering cherry trees for the war’s duration. Suspended during WWII, the festival resumed in 1947 with the support of the Washington, D.C., Board of Trade and the D.C. Commissioners.

The Japanese ambassador gave a 300-year old stone lantern to the city of Washington to commemorate the signing of the 1854 Japan-US Treaty of Amity and Friendship.

The Japanese gave 3,800 more Yoshino trees in 1965, which were accepted by First Lady Lady Bird Johnson. These trees were grown in the United States and many were planted on the grounds of the Washington Monument. For the occasion, the First Lady and Ryuji Takeuchi, wife of the Japanese ambassador, reenacted the 1912 planting. In 1982, Japanese horticulturalists took cuttings from Yoshino trees in Washington, D.C., to replace cherry trees that had been destroyed in a flood in Japan. From 1986 to 1988, 676 cherry trees were planted using $101,000 in private funds donated to the National Park Service to restore the trees to the number at the time of the original gift.

In 1994, the Festival was expanded to two weeks to accommodate the many activities that happen during the trees’ blooming.  Two years later, the Potomac and Arakawa became sister rivers. Cuttings were taken from the documented 1912 trees in 1997 to be used in replacement plantings and thus preserve the genetic heritage of the grove. In 1999, fifty trees of the Usuzumi variety were planted in West Potomac Park. According to legend, these trees were first planted by Emperor Keitei in the 6th century and were designated a National Treasure of Japan in 1922. From 2002 to 2006, 400 trees propagated from the surviving 1912 trees were planted to ensure the genetic heritage of the original donation is maintained.

A Guide to Things to See in Washington DC

Here is an excellent guide on what to see in Washington DC.  And here is a some information from the National Park Service about the National Mall.